The die is cast: Dr. Helmut Schreiber from Freiburg, leading sports federation physician of the German Athletics Association (DLV) from 2000 to 2004 and again since 2010 has been named "Sports Doctor of the Year".

Helmut Schreiber has a degree in both psychology and medicine and holds a position as an orthopaedic specialist with a Certificate of Additional Qualification in Sports Medicine and Chiropractic Therapy in the practice clinic „Die Sportorthopäden“ [“The Sports Orthopaedic Specialists”] in Freiburg: in his role as sports federation physician and leading sports federation physician of the German Athletics Association (DLV) he has provided medical assistance and care to numerous athletes during three Olympic Games, four World Championships, three European Championships, countless World and European Indoor Championships as well as nine Universiades. 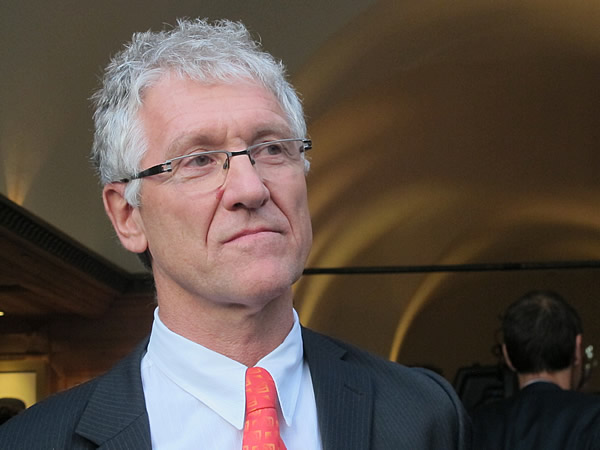 Dr. Helmut Schreiber from Freiburg, leading sports federation physician of the German Athletics Association (DLV) from 2000 to 2004 and again since 2010

“The selection committee has made an excellent choice,” said the DLV sports federation physician and recipient of the 2002 Sports Doctor of the Year award, Dr. Karlheinz Graff, in his laudatio of Dr. Schreiber. With an undeniably high level of experience gained in his time as a top athlete as well as a physician and “an exemplary commitment”, with much enthusiasm and a keen sense of responsibility he has always looked out for and served the best interests of the athletes, Graff continued.

Helmut Schreiber has not only devoted well over 40 years to the field of sports medicine, but was a successful athlete himself. The javelin thrower (his personal best throw was 92.72 metres) became, among other things, Student World Champion in 1979 and German Champion in 1981; in 1980 he ranked second best in the world. Shortly before the 1984 Olympic Games in Los Angeles (USA) he ended his athletics career after he was not able to qualify for the Olympics due to injury.

Since 2002, the “Sports Doctor of the Year” award is given out annually by GOTS. Recipients of the “Sports Doctor of the Year” award must fulfil a number of criteria, including the following: continuous provision of medical assistance to a national team in an Olympic discipline as a team/sports federation physician at European Championships, World Championships and/or the Olympic Games; absolute reliability in anti-doping issues; active involvement with the sports federation they are serving in order to prevent acute and chronic sports injuries; strict adherence to the principles of an ethically clean medicine; and finally, above-average knowledge and skills in the field of Applied Sports Medicine.